You are here: » Publications » News 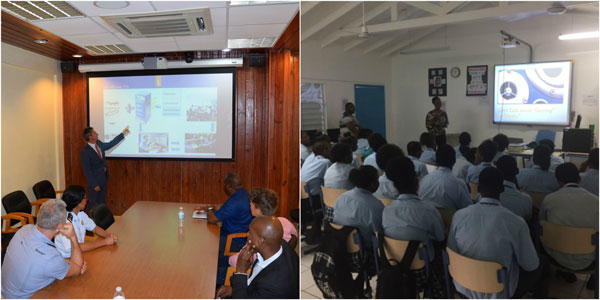 Mudde’s presentation gave a peek into the development of such a system in the Netherlands and outlined its benefits in combating crime and protecting travellers from becoming victims. A press release on Sunday said the Police Force in collaboration with the Royal Marechaussees and VDSM are currently  working on the Advanced Passenger Analysis System. According to the release, the police are seeking to establish an automated system in collaboration with Princess Juliana International Airport SXM to analyse  passenger information. The intention is to also involve the Customs Department so that the system can also be introduced at the Harbour in the future. It should be noted that immigration currently falls under the Police Force. The implementation of the system is expected to improve the efficiency and effectiveness of controls at the country’s borders and in combating crime.
Source: The Daily Herald

Under the supervision of Chief Commissioner Denise JACOBS, the immigration department has recently fallen under the Police and they are fully operational. Like the other parts of the Police, the aim is to further professionalize the immigration. In several areas also work is already underways, such as in the field of information and service.
In collaboration with the Royal Marechaussee and VDSM (Veiligheidsdienst), the Police department is now working to shape the so-called Advanced Passenger Analysis system.The Police are seeking to establish an automated system for analyzing passenger information and to implement this in cooperation with the airport.
On November 16, 2016, Mr. Willem Mudde from the Royal Marechaussee in the Netherlands gave a presentation to the Police, VDSM (Veiligheidsdienst St Maarten), Port and the Royal Marechaussee in Sint Maarten on the operation of the system. The aim is to involve the customs in this and hopefully in the near future to ensure the implementation at the harbor.
KPSM Press Release.